Playing around with my dissecting microscope

Reading one of my fungi books the other day I noticed that some fungi spores are much larger than others, in particular those of the Scarlet Elf Cup. They average a whopping 28 microns in length. So, armed with my modest dissecting microscope set on 40x magnification with back light I had a tentative search for them. I was pleasantly surprised at how easy they were to observe and photograph, even some asci were present with most of their spores still inside - fantastic stuff!
Now I'm under no illusions as to how useful this new tool will be in future fungi ID but even if it allows a handful of new fungi species to be confirmed I'll be more than happy. It's nice just to see fungi at work on such a tiny scale. 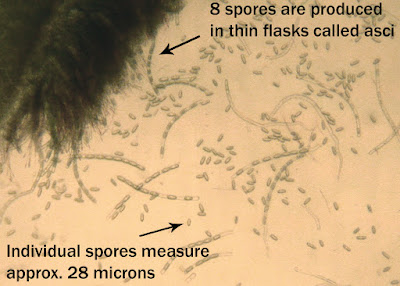 I can only imagine what fun it would be to have a set-up capable of 500x or even 1000x magnification as recommended for fungi studies.

Posted by charlie streets at 10:42 AM No comments:

CLICK ON THE CORESPONDING NUMBER UNDER "FAMILY INDEX" ON THE RIGHT

charlie streets
Born in 1965 in the pennine borough of Calderdale, West Yorkshire, I take an interest in most forms of wildlife and enjoy trying to photograph them.